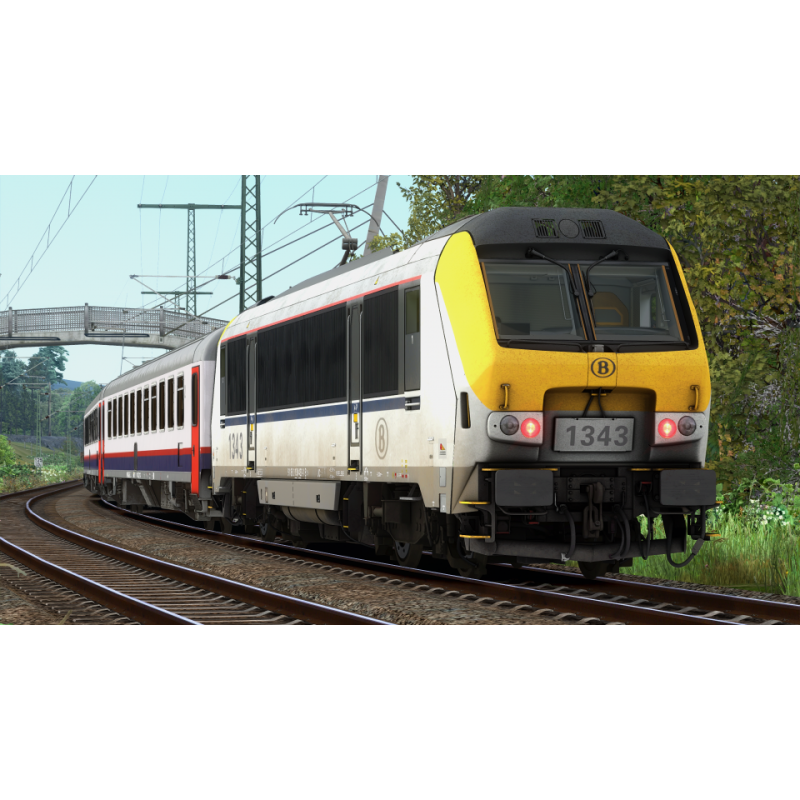 This add-on allows you to drive at a technical compliance level using the essential procedures to start and drive this locomotive.

However, you can also simplify the driving experience by deactivating the safety systems.

This locomotive is a dual voltage engine: 3 kVDC and 25 kVAC (and 1.5 kVDC reduced power). With a maximum speed of 200 km/h, it is intended to run on the SNCB, CFL and SNCF networks, is allowed to the stations of Roosendaal and Maastricht on the NS network (Netherlands).

It develops a power of 5,600 kW (about 6,700 hp) and can run heavy freight trains at high speed to the Grand Duchy of Luxemburg, as well as passenger train.

The locomotive is equipped with two high-performance twin-engine bogies ensuring both a very high level of comfort at high speed and little aggressiveness on the track in curves.

The two Belgian and Luxemburg networks have two distinct series of HLE13 locomotives in service:

Not compatible with Train Simulator 2021 32 bits

General characteristics of the real locomotive

No customer reviews for the moment.

The class 96 (MS96 in Dutch, AM96 in French) is an electric multiple unit constructed in 1996[2] for the National Railway Company of Belgium.

They incorporate features from the DSB IC3 trainsets in order to enable passage from one set coach to another. When two or more units are coupled together in a single train, the entire front door folds away to give a wide passage, and the rubber diaphragms at the ends form a flush aerodynamic seal.

SNCB's M4 coaches are UIC coaches produced in the late 1970s.
The M4 series was ordered together with the multiple units of series 03 (AM-MS 80 / 82 / 83) to meet the needs of the future IC-IR plan of 1984 and the major electrification of the network.

This package give you the possibility to add 28 variants to the product SKTRAINS AM/MS 96.

/!\This package requires the SKTRAINS AM/MS 96 add-on available on this site. /!\

The I11 coaches are modern UIC-Z coaches of the SNCB. They are suitable for speeds up to 200 km/h. Air-conditioned, they offer good comfort conditions with an interior noise level of only 65 dB at 200 km/h.